It was in September 1987 that I started secondary school. In the few months before that, I was hearing stories of some savage things being done to the first-year students, by second-year students. Consequently, I kept thinking to myself what I could do to stop these things from happening to me. It was only about a week into that academic year that the school headmaster made it clear that bullying would not be tolerated, and that it was one of a few things that will be dealt with severely. As it happened, whatever harassment I received from the second years was, for the most part, of a verbal nature.

Although I had several fainting attacks during childhood (from age 10 to 12), I wasn’t really able to articulate the cause of all of these attacks. It wasn’t until March 1988 that I was able to identify a definite cause of fainting attacks. My squeamishness became apparent then. I would define squeamishness as having an adverse reaction to viewing several internal bodily tissues. It was in science class when the teacher was showing us a joint between two bones, specifically a hinge joint. She took the joint apart until the synovial fluids in the joint (which lubricates the joint) became visible, before passing it around to let each of us run our fingers along the surface of the joint, to show how smooth the surface is. When my turn to touch the joint was getting closer, I could sense my head getting dizzy, a sensation that I now identify as early warning signs of a fainting attack.

When I finally ran my fingers on the joint, the next thing that I remember was I was lying down on the floor, having suffered a fainting attack, with the teacher tending to me. The little man inside me had pressed Ctrl + Alt + Del. I was the only person in the class to whom this happened. After that, whenever the teacher gave a demonstration of internal body parts, I had to go down to the assembly area. And of course, I was told not to be dossing down there.

For a while, after that, I was very wary about being in butcher’s shops, and also passing the butchery departments in supermarkets. Whenever I was in a butcher’s shop and there was a big queue ahead of me, the alarm bells started ringing, because as far as I was concerned, there was a danger that as long as I was looking in the direction of the counter, I would see some bone joints or bits of internal organs or the like. This was also a reason why I did not do biology in the Leaving Cert.

It was also in this stage that I conjured up the term “octovalence” as a scientific term that would relate to “peer pressure”. It was in Inter Cert Science when we learned about the structure of the atom. An atom consists of a nucleus, made up of protons and neutrons, and orbiting this nucleus are electrons. For an atom to have a neutral charge, the number of protons has to equal the number of electrons. These electrons are arranged in concentric shells. The maximum number of electrons that a shell can hold is proportional to the square of the shell number (The innermost shell can hold 2 electrons, the one immediately outside that can hold 8 electrons, then 18, and 32 and so on.) As well, an atom likes to have eight electrons on its outer shell, hence the term octovalence. Noble gases have this property, i.e. Helium, Neon, Argon, Krypton, Xenon, and Radon. They are the gases on the rightmost column in the Periodic Table below. 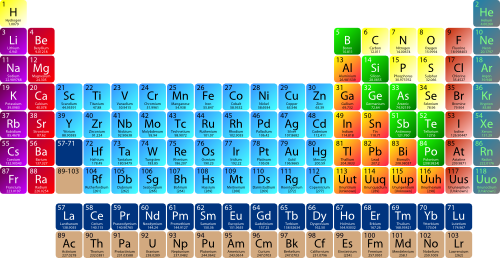 To be honest, I did not succumb to peer pressure in my early adolescent years. For example, I was not the one to pester my parents for money for music cassettes/CDs, concert tickets, soccer jerseys or the like.

It was not until July 1991 that I got a real taste of peer pressure. I attended a week-long course at the University of Limerick, which gave students preparing for their Leaving Cert, a taste of University life. (The Leaving Cert is what 17/18-year-old students in Ireland have to do, in order to progress to third-level education; equivalent to the A-Levels in the UK, and the Bac in France). There I became friendly with a number of students on the course, some of whom, I concluded to myself, hadn’t had much of a problem with from acne, and because of this, I wished I hadn’t.

It wasn’t until after third-year, in 1990 that I was allowed to go to discos, which I saw as an attempt to socialise with my classmates. Apart from the music being played so loudly, resulting in me having to raise my voice to be heard, and having to turn my ear towards whoever is talking to me in order to hear, unless I’m far away from the speakers, I noticed many boys dancing with girls, and this includes some of my classmates, often getting very intimate. Needless to say, I wasn’t one of these. Is it better that way, who knows?

Some widgets will go here